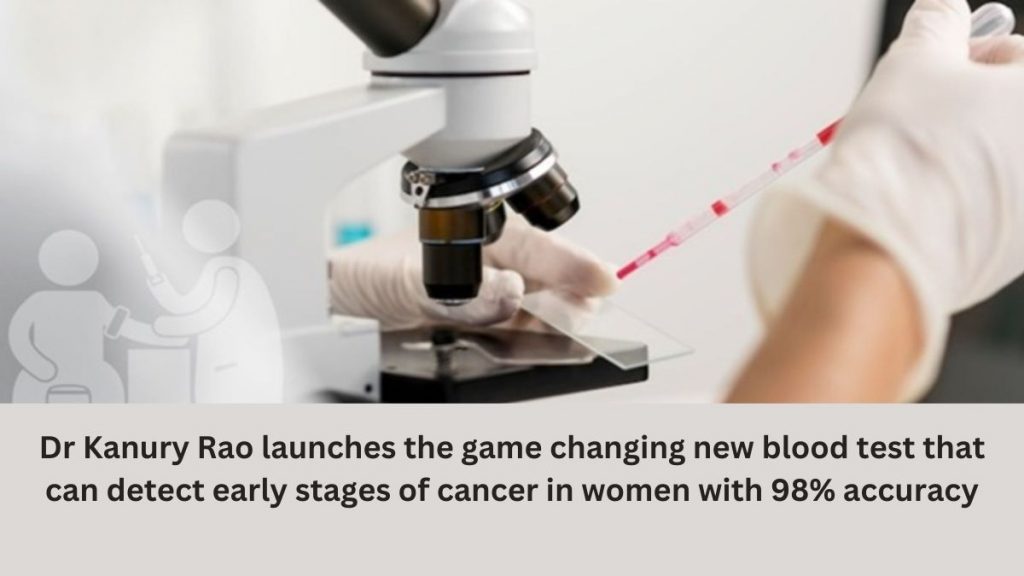 Gurgaon based healthcare tech company, PredOmix Technologies, has launched a ground breaking blood test that can detect multiple cancers at early stages in women. Dr. Kanury Rao is one of the directors at PredOmix Technologies. This could dramatically advance the diagnosis of the disease, saving millions of lives Nearly 70% of cancer deaths are caused because they are often detected at later stages. The developers of the test aim to reduce the number of advanced cancers in the country.

With more than 98 per cent accuracy, this blood test is the first test to be developed to detect early stages of women specific cancers based on unique metabolic signatures. Cancers are difficult to detect and can often go undiagnosed until they have reached an advanced stage due to a lack of effective diagnostics tools. This is the primary reason why cancer survival rates are low in India.  Current screening methods rely on visual, imaging and other biomarker based investigations, meaning the tumor must grow large enough until they can be accurately detected. Only a limited per cent of people receive an early diagnosis. Patients receiving late diagnosis face a prolonged battle with cancer.

PredOmix has released this first-of-its kind blood test that can simultaneously detect four different types of cancers – breast, endometrial, cervical and ovarian. PredOmix Chief Scientific Officer, Dr. Kanury Rao, says early cancer detection is what saves lives. “Ours is a simple blood test that looks for cancer metabolic signatures in the bloodstream” Dr. Rao says. “This test is very significant for women.  We have developed this test for early detection, so we can diagnose cancer earlier and so treatment can begin earlier and avoid some of the long-term problems and help women live longer”, Dr. Kanury Rao states. The test called as OncoVeryx-F, is indicated as an annual screening test for asymptomatic women, ‘at-risk’, and women with hereditary cancer above the age of 45 years who may not have any symptoms.

The PredOmix test essentially uses its in-house patented technology to scan for specific metabolite fingerprints in a person’s blood. Combined with proprietary AI tools, the test indicates the four cancers with high accuracy. Data from clinical trials, conducted on over 5000 women in India, has shown that the test has an accuracy of over 98 percent for all stages of cancers including stage 1 and 2. The advantage of the test is that it requires only a small quantity of blood without any exposure to radiation or discomfort associated with invasive screening procedures.

Priyanka Singh (name changed), a resident of Gurgaon, was one of the first patients to sign up for the test. She knows the feeling all too well. Her mother, when she was in her 70s, was diagnosed with stage IV ovarian cancer and died from it six months later.  After her mother’s death, Priyanka’s gynaecologist ordered a CA 125 test, which is often used to look for early signs of ovarian cancer in women with a high risk of disease. Priyanka’s CA 125 test was normal. Nine years later, in June 2022, Priyanka, now approaching middle age, happened to meet Dr. Kanury Rao at a medical conference, who told her that, due to her being at high risk for the disease, she should be monitored every year. Priyanka had no further monitoring since the first CA125 test. She gave her blood sample and got the OncoVeryx-F test done the very next day. “Little did I know how that advice would save my life,” says Priyanka. A week later, her test results came out positive with high probability of ovarian cancer. A transvaginal ultrasound was performed by her gynaecologist– the ultrasound had shown a mass in her abdomen. “I had a follow-up CA 125 test”, recalls Priyanka, “and this time it was not normal, it was very high. I was immediately scheduled for a biopsy. I was told that they had found cancer. Luckily it was Stage 1. “I am just thankful that the tumor was caught on time. She feels very blessed. “I am healed,” she notes.

As per the company, the test is non-invasive and uses just 1 ml of blood. It takes up to 7 days to produce results. If results are positive, your healthcare professional should be able to put you on the right track to proper treatment.

Dr. Pradeep Kumar Reddy, Medical Oncologist, of Continental Hospital, Hyderabad has called the test as a revolutionary step in the direction of catching cancers very early in Indian women. “We have been waiting for such a technology developed by PredOmix for ages. Detection of cancer in stage 1 and 2 would change the healthcare scenarios completely’, he says.

Dr. Kanury Rao, however, has made it clear that despite the test’s high accuracy in detecting cancer at a very early stage, this should not be treated as a replacement for the conventional existing screening tools such as mammogram, pap smear and ultrasonography.

To begin with, the test will be available through clinicians, but the company wants to expand it to all of its collection centres eventually. The company is also working in parallel to expand the scope of this test to cover multiple cancers in both women and men, which would be launched early next year.

Uncovering The Benefits Of Anti-Aging Treatments

Tips For Choosing The Perfect In Home Health Care Service

Kidney Transplant: How the Process Works?